If you live in an apartment or small home, your Wi-Fi coverage is probably great. If you live in a building or home with more space, you may have spotty coverage. For example, I get a great signal – and speeds – near the front of my house where my office and main router are located. In my master bedroom, or on my patio at the back of the house, it’s a different story altogether.

You can always take an old router you have and turn it into a repeater by installing custom firmware like DD-WRT. I did this and it works, but it steals bandwidth from other devices around the house and honestly isn’t that reliable. It’s great for a quick fix if you have an old router and don’t want to spend more money, but it’s not a comprehensive solution.

So, what do you do? How can you expand coverage to the rest of your home or property? Let’s dive in and find out!

What is a mesh router?

Mesh routers are routers that have multiple access points on a single network. Traditionally, mesh networks and related equipment have been used by corporations and organizations to cover large areas, like office buildings, with a singular network so that employees can move around without losing a consistent internet connection. The technology works similarly to cell phone towers that allow people to stay on the phone despite moving around large areas.

The technology has since been adapted for the consumer market, so you can take advantage of mesh networking in your home.

Why You Need a Mesh Router?

Boiling it down to extreme basics, a conventional router takes the internet signal and broadcasts it [wirelessly] to a small area. But a major drawback of regular routers is the signal they broadcast is exclusive and limited. There’s generally only one access point and all your devices connect to that single hub, which juggles pretty much all internet traffic.

So, when you’re using a phone in your living room and your spouse is using a laptop in the bedroom, both devices are connected to the router in the office. It has to juggle all connections simultaneously. Traditional routers don’t necessarily do a poor job of this, but there are a lot of factors they must contend with like total traffic, available bandwidth, distance, objects or obstructions, and even walls or appliances.

I’m sure you’ve heard it said before that a microwave can affect Wi-Fi and Bluetooth signals?

A mesh router is specifically designed to eliminate dead zones and broadcast a signal to a much wider area. A single device acts as the main router or portal, if you will, and connects to the modem. Then, several additional access points – called “satellites” – are placed in the nearby area and boost the signal from the main device by rebroadcasting it. The signal is stronger and wider, and this helps the network overcome some of those obstructions like offending walls or appliances.

There are some pros and cons to using a mesh router over a conventional one. So, it’s best to look at the benefits and decide if they’re right for you or not.

Installation and Ease of Use

For the most part, installation and ease of use are simple and easy. Just like a conventional router, you connect the main unit to the modem and then set up your home network. The satellite units or additional extenders can be placed around your home to boost the signal and connect directly to the main unit, with little to no input from you.

To connect to the internet, most mesh routers come with a smartphone app so that you can set everything up easily at your convenience. Settings like parental controls, device authorization, and more are often controllable from a smartphone app as well.

Mesh routers are generally more expensive than conventional routers. This is because they require more equipment. It also means they use a little more power in the long term.

Based on our research, here are the best mesh routers you can install in your home to expand Wi-Fi coverage.

Nest Wi-Fi from Google has been a popular product since it first came out. Thanks to the easy setup and strong performance it has continued to be popular over each new version.

This 3-pack setup with two access points and one router will give you a Wi-Fi coverage up to 5400 sq ft. The Nest Wifi Mesh Router (3 Pack) costs about $350. This has been known to go on sale for $300. So that’s something to watch for especially around Black Friday, Cyber Monday or other sales.

So what are customers saying about this router? At Best Buy, this router is nearing 5,000 reviews with 4.6 out of 5 stars. Elsewhere at other stores, it has a similar rating.

What can I expect from the Nest Wi-Fi from Google performance and features? You can access this router through the Google Home app. Features include bio-forming technology, easy setup, ethernet ports, Wireless AC technology (both 2.4 GHz and 5 GHz) with speeds up to 2.2 Gbps, a Wi-Fi coverage up to 5400 sq ft, and more. 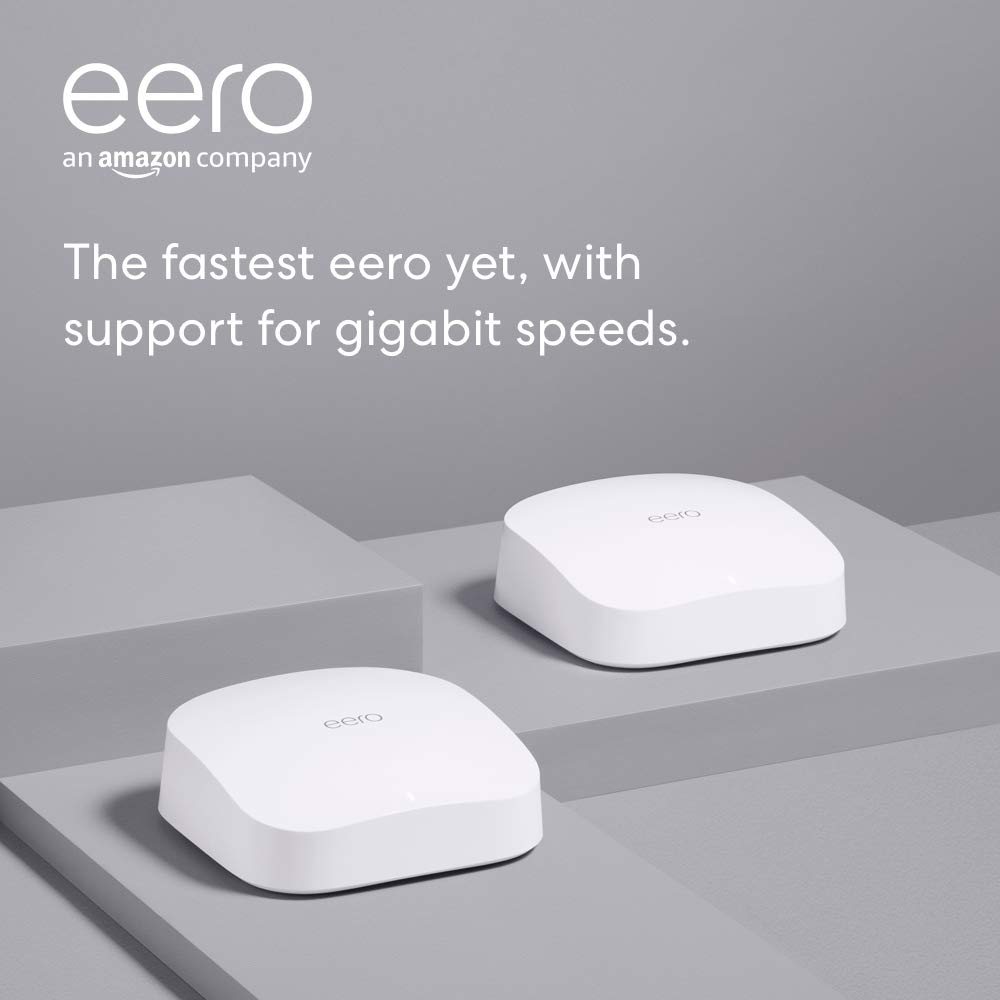 eero might have a name that you haven’t really heard of but you have heard of Amazon. In 2019 Amazon bought Eero. Because of this, it has great integration with Amazon’s Alexia and smart home devices. The cost for this 2-pack runs right at $400.

So what are customers saying about the eero pro? On Amazon, this has about 1500 reviews with a 4.5 out of 5-star rating.

What can I expect from the Amazon eero Pro 6 performance and features? This pro 6 system covers up to 3500 square feet with Wi-Fi 6 speeds up to a gigabit. This comes with an Amazon basics Ethernet cable so you can connect to other devices like printers. This also has a built-in ZigBee smart home hub. Supports up to 75 devices simultaneously. Easy setup and great integration with Amazon’s Alexia. 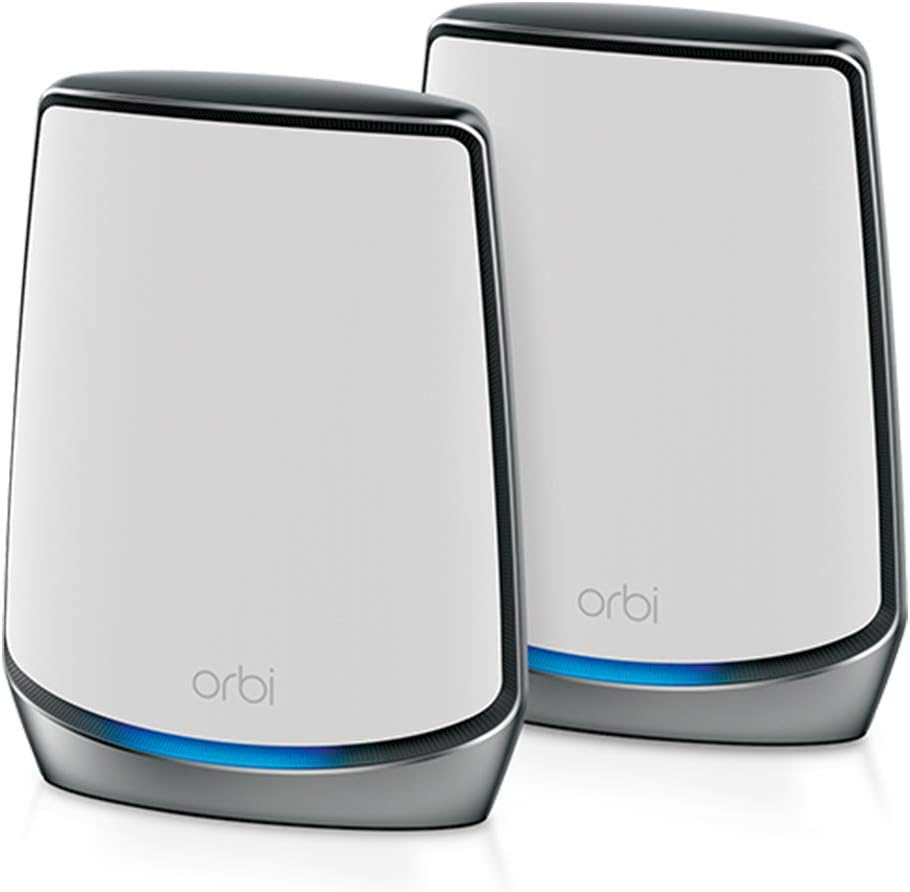 If you’re looking for the best and most powerful performance, the Netgear Orbi AX6000 is going to be what you want. This has one of the fastest real-world test speed numbers we’ve ever seen from a mesh router. On the downside, it’s also pretty pricey. The starting price on the system is $700 but you can often find it for closer to $600. Still, that’s going to be out of the reach for a lot of people.

If you’ve ever bought a router before, you have almost certainly seen the name Netgear. The company has been around since 1996 and has been making routers ever since. So if you are looking for a trusted brand that’s been around for the long haul, Netgear is a good choice.

So what are customers saying about the Netgear AX6000 WiFi Mesh Router? On Amazon, this has over 2,300 reviews with a 4.4 out of 5 star rating. Considering the price tag, we feel like any reviewer is going to have super high standards because you’re naturally going to expect a lot. Other review sites also give this great test rating.

What can I expect from the Netgear AX6000 WiFi Mesh Router performance and features? You get coverage up to 5,000 sq. ft., 100+ Devices supported, WiFi 6 with Up to 6Gbps speeds (up to 2.5Gbps), 4 Gigabit Ethernet ports, and more. 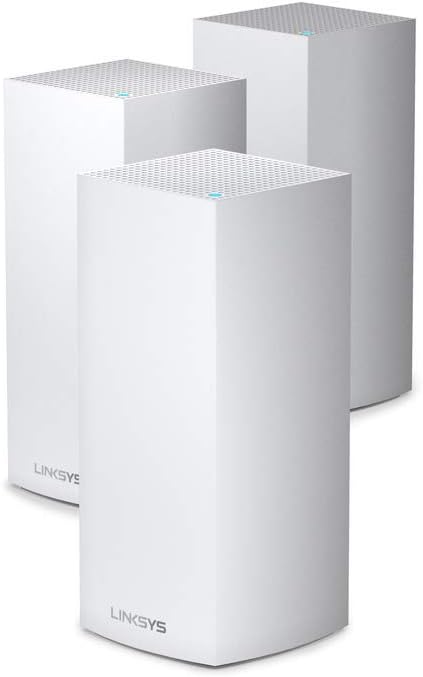 Linksys AX4200 Smart Mesh Wi-Fi 6 Router has the longest reach on our list. It’s not the fastest performer out there in real-world tests (it’s still fast) but it does cover an enormous amount of area. This makes it a good option for very large homes. For this three-pack, the price runs right at $500.

Linksys is another old well-known brand of routers that has been around for a long time. If you have used routers since the 90s, there is a good possibility that you have used a Linksys router.

So what are customers saying about the Linksys AX4200 WiFi Mesh Router? On Amazon, this has over 500 reviews with a 4.5 out of 5-star rating. This has solid reviews at other sites as well.

What can I expect from the Linksys AX4200 WiFi Mesh Router performance and features? The top feature is the coverage of up to 8,100 sq ft and up to 120 devices. Other features include easy setup/control via app, advanced security, parental controls, and more. 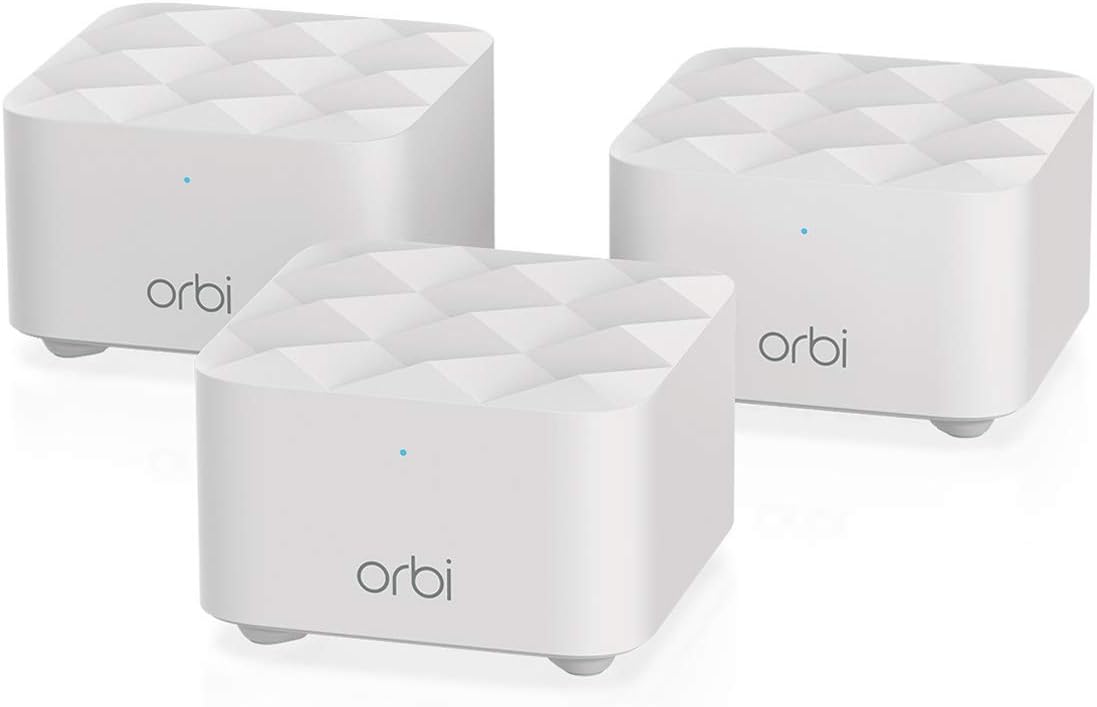 If you’re looking for a budget buy when it comes to home mesh Wi-Fi routers, this is it. NETGEAR Orbi Whole Home Mesh WiFi System (RBK13) comes in at $200 but it’s often discounted. As of this writing, it’s just around $120. That’s cheaper than many non-mesh routers. Compared to everything else you see on our list, this thing is a great buy if you don’t need some of the features the other systems offer.

What your not getting are features like tri-band, Wifi 6, built-in Alexa speaker, future-proofing, and a large amount of raw speed.

So what are customers saying about the NETGEAR Orbi RBK13 WiFi Mesh Router? On Amazon, this has about 1,500 reviews with a 4.5 out of 5 star rating. This has good reviews at other sites as well.

What can I expect from the NETGEAR Orbi RBK13 WiFi Mesh Router performance and features? You get coverage of up to 4,500 square feet, 1 Gigabit Ethernet port, easy setup, works with 20+ devices at one time, and more. In all honesty, if you aren’t a power user, this system might have all you need for a much lower price than most other systems that cost much more.

Mesh routers are remarkably similar to conventional routers, with a few exceptions. For starters, they generally come bundled with multiple units – the main hub and numerous satellite devices or receivers. You connect the main unit to your modem and the rest you place sparingly around your home. The ultimate goal for all of these models is the same, however. They offer improved performance and much more reliable Wi-Fi coverage around your home, effectively eliminating dead zones.

So, if you ever get tired of poor Wi-Fi signal or speeds in the far reaches of your home, these mesh routers are definitely for you.

Make sure you check out our article on The Very Best Gigabit Modems to get the best modem to go with your mesh router.

What do you think of our list of the best mesh routers? Did we miss anything you would have included?